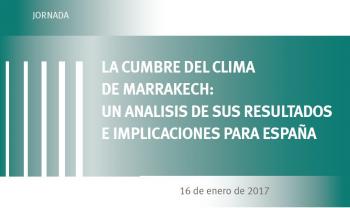 With the signing of The Paris Agreement and its subsequent adoption in November 2016, a major step has been taken in the process towards a more sustainable model, and now being fundamental the consolidation of this Agreement. The COP 22, held in Marrakech also at the end of 2016, has led to the continuation of the negotiation processes for the implementation of the Agreement.

This workshop, was  on the 16th of January 2017 at the Areces Foundation (C/ Vitruvio, 5, 28006 Madrid) and was dedicated to publicize the main conclusions and results acquired in Marrakech.

During the meeting, some of the great experts on the negotiation processes on climate change announced their thoughts and evaluation of this process, wich, undoubtedly, represents an unstoppable process towards the environmental sustainability of the planet.